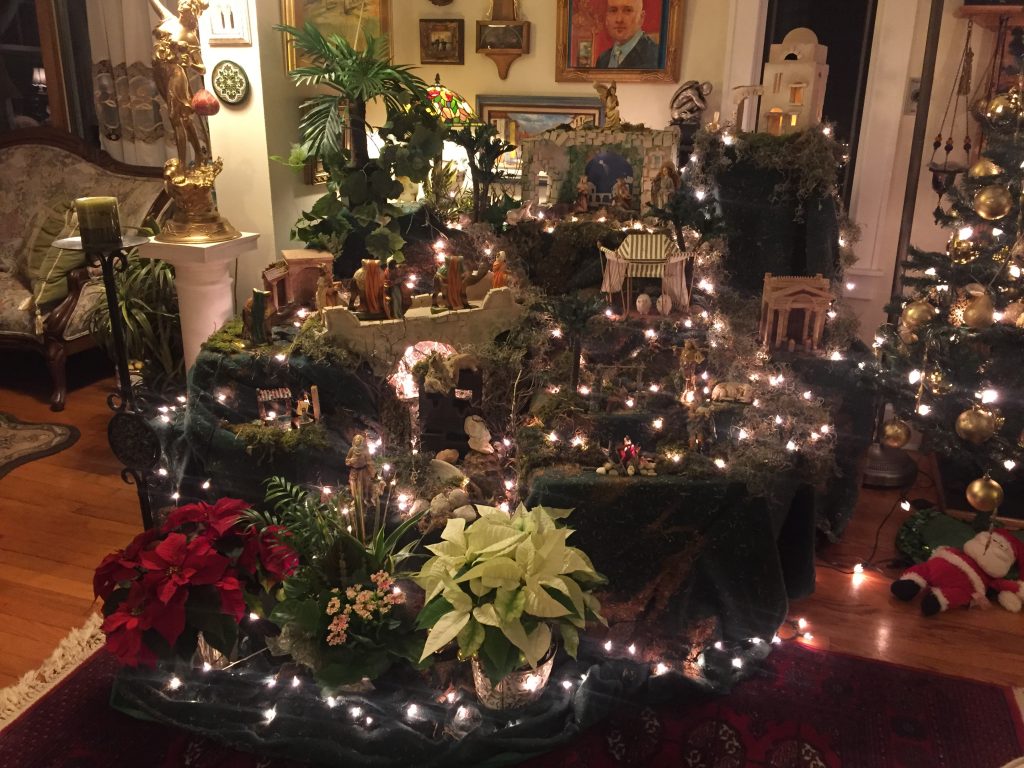 In the sixth month the angel Gabriel was sent by God to a town in Galilee called Nazareth, to a virgin engaged to a man whose name was Joseph, of the house of David. The virgin’s name was Mary. And he came to her and said, “Greetings, favored one! The Lord is with you.” But she was much perplexed by his words and pondered what sort of greeting this might be. The angel said to her, “Do not be afraid, Mary, for you have found favor with God. And now, you will conceive in your womb and bear a son, and you will name him Jesus. He will be great, and will be called the Son of the Most High, and the Lord God will give to him the throne of his ancestor David. He will reign over the house of Jacob forever, and of his kingdom there will be no end.” Mary said to the angel, “How can this be, since I am a virgin?” The angel said to her, “The Holy Spirit will come upon you, and the power of the Most High will overshadow you; therefore the child to be born will be holy; he will be called Son of God. And now, your relative Elizabeth in her old age has also conceived a son; and this is the sixth month for her who was said to be barren. For nothing will be impossible with God.” Then Mary said, “Here am I, the servant of the Lord; let it be with me according to your word.” Then the angel departed from her. -Luke 1:26-38

Our family has a beautiful tradition at Christmas that I often tell and talk about at this time of the year. It is the Colombian tradition of a Pesebre, or Nativity Scene. Nativity scenes are also popular in the United States, but in our family’s tradition from Colombia, the nativity scene is built as part of the living room and takes up a large amount of space (right now we have a couch in the dining room, and other furniture living in the basement for a few weeks!).

Space has to be made.

The nativity scene is large, with rolling hills constructed, the town of Bethlehem, the shepherds, sheep, cows and donkeys, the Holy Family, Wise men and their camels. Live plants are incorporated and a fountain with running water that creates a stream.  Angel Gabriel is there, as are birds in the small palm trees. All of it comes together to create a living nativity.

The tradition in Colombia is a Roman Catholic one of a Novena (nine nights of prayers) that begin in December 16th. The family gathers around the nativity scene, usually after a dinner party with family and friends. Small gifts are hidden in the nativity scene for children to find, of the stocking stuffer size and variety. The prayers each night come from the point of view of different parts of the story (Mary, Joseph, the shepherds, the angel, etc.) and so the biblical story is told in stages. There are also repetitive prayers and songs each night and children are encouraged to sing along and accompany the singing with either hand-made or small instruments. And then afterwards some drinks and dessert.  After Christmas Eve the Wise Men begin to move in the nativity scene until they arrive near to the baby Jesus.

This is a lively tradition, and one I have come to love in my home. Each night prayers are offered and everyone talks to God in silence or out loud about what is going on in their lives and what their prayers are for the New Year.  The expectation is that just as God surprised and cared for the world with the world with the mystery of the Incarnation; that so will God move in our lives and the life of this world today.

And we need Incarnation, don’t we?

As we come close to the fourth Sunday of Advent my prayer is that we will be bold as we enter this new year.  Bold in our expressions of beauty and bold in our living out of the faith offered to us by the Christ Child.  The world needed nothing less 2000 years ago and it needs nothing less from us as disciples today.

Blog--Shannan Vance-Ocampo by Shannan R. Vance-Ocampo is licensed under a Creative Commons Attribution-NonCommercial 4.0 International License. Permissions beyond the scope of this license may be available at www.shannanvo.com.